I hope you and your families are all safe and well in these strange times.
We are shortly going to announce a series of online events to re-connect our members and share information and discuss policy. I’ll send you a special bulletin soon, once all the details have been confirmed.
As always, please visit our website and our Facebook group. Our community is only as strong and as beneficial as we choose to make it. Please work with our Secretary General Cristina Berechet to feed good content into this newsletter and our network at large.

I would especially encourage you to share tips on continuing your campaign during this crisis – better use of webinars, new fundraising ideas etc. I have joined lots of interesting online events and my organisation in London is making use of tech to appear on the media, too.

What else has your organisation done during this period? I’d love to know, and other members in the network will benefit from hearing from you.

Very best wishes, and keep up the fight!

Next WTA events:
As above, there will be a series of online events announced very soon.
The next WTA World Conference will be hosted by Contribuables Associes, the French taxpayer association, in Paris in June of 2021. 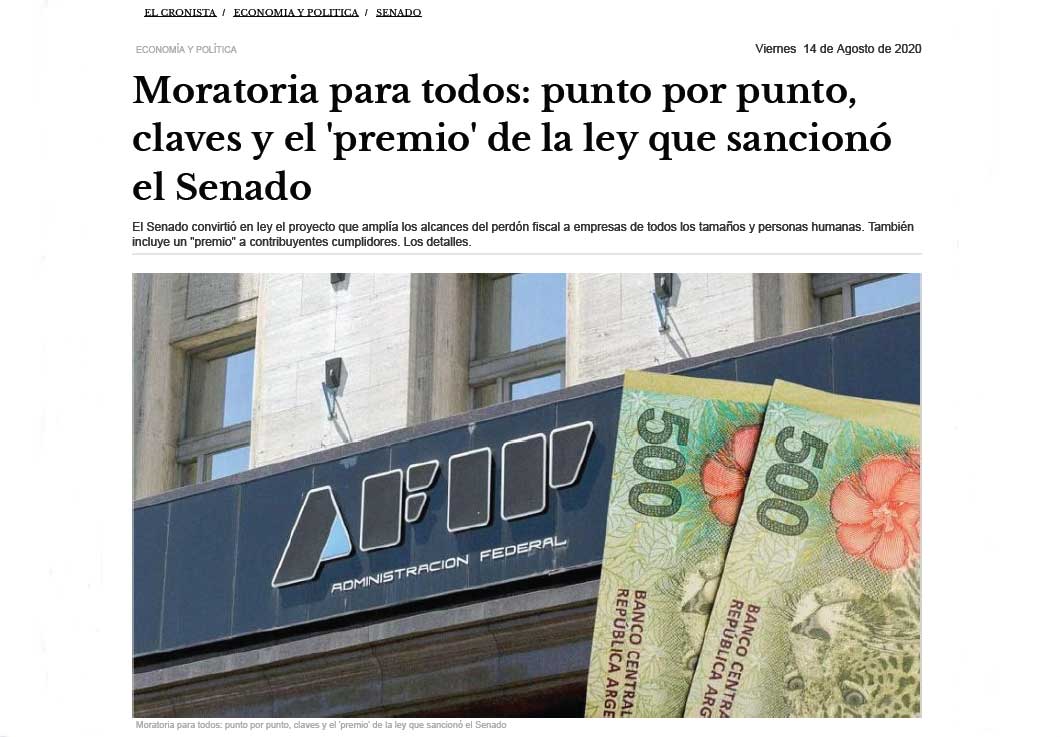 CANADA: VICTORY – Supreme Court Rules for Taxpayers
The Canadian Taxpayers Federation won an important victory at the Supreme Court of Canada. “Canadians elect representatives to take care of our tax dollars and the Supreme Court’s decision upholds that principle,” said Aaron Wudrick, federal director at CTF. Governments in British Columbia and Nova Scotia implemented wage restrictions on all provincial employees, but judges in those provinces who were denied large pay increases went to court to force the release of confidential cabinet documents. The CTF intervened in the case to argue that governments don’t need to disclose confidential documents to justify denying big pay raises if they’re controlling spending across the whole government.
The Supreme Court ruled against the judges. Read the whole sorry story here.
And this is just the start because CTF will be back at the Supreme Court in a few months to fight the carbon tax. CTF got a big win when an Alberta court ruled against the carbon tax. 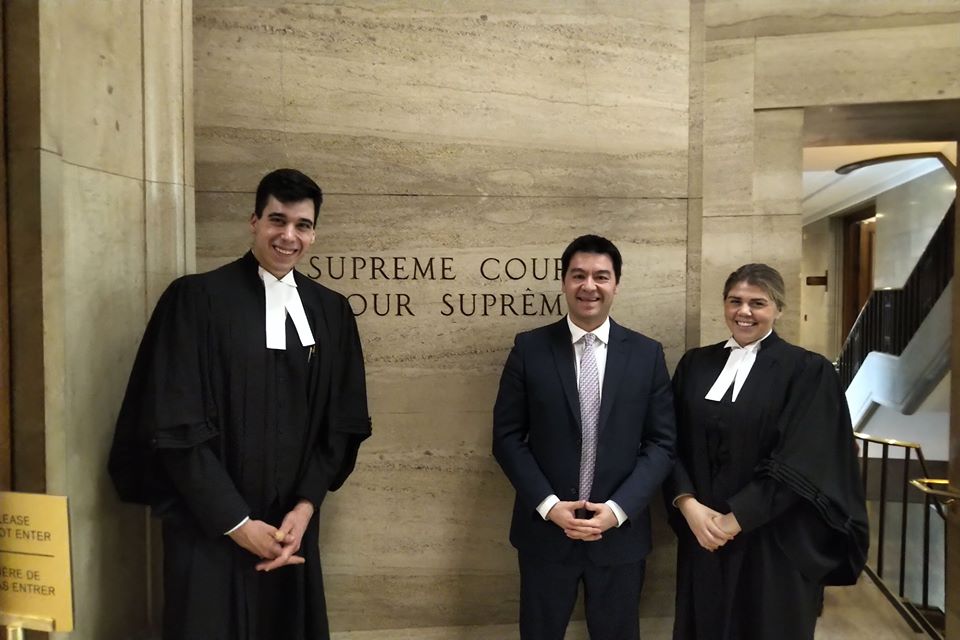 EUROPE: Pandora’s Box Has Been Opened!
Rolf von Hohenhau, president of the Taxpayers Association of Europe, shows his concern about taxpayers footing the bill for the European spending and debt policy.
In his opinion, “the agreement reached by the European Union regarding the 750 billion euros aid package (Next Generation) and the Medium-Term Financial Framework (MFF) in the amount of 1.082 trillion euros is generally viewed as a success”. Nevertheless, member countries have to take up debt in order to finance their aid programs, and now they are also held liable for the new EU debt. Additionally, it is not guaranteed that the countries can get their economies back on track with the help of these aid measures.
Finally, the president of Taxpayers Association of Europe, points out that the 1.8 trillion euros is just a fraction of the real stimulus package. “The ECB has increased its bond purchases, there are also funds from the European Investment Bank (EIB), the European Stability Mechanism (ESM) and further programs are already in the pipeline of the EU Commission. Altogether, this amounts to 5.5 trillion euros! The EU is on a direct path into a debt trap. And this is completely ignored in the current discussion”.
“We, the taxpayers, therefore have to be on highest alert, because in the end, it will be us who have to foot the bill for this European spending and debt policy,” states the president of the European Taxpayers Association.
Check here for TAE’s review of the EU financial frameworks.

EUROPE: Taxpayers Groups Concerned about the Consequences of Digital Taxes.
Like many other taxpayers groups, Taxpayers Association of Europe (TAE) is concerned with the new initiative launched by the EU Commission, now packaged to finance the planned new EU debt, a digital tax as a new and additional source of revenue. The OECD and the majority of members in the European Parliament also support this initiative.
TAE stressed the important tax burden digital companies will have to support under this new tax on sales. Taking into account the digital tax with a return on sales of 5%, 10% and 15% the hypothetical burden (corporate and digital tax) digital companies in Germany would face goes from 44% to 51% and 72%. In other words, digital companies will support a dramatically higher tax burden than non-digital businesses.
As Michael Jaeger mentions, “now the focus is on the big digital players, tomorrow it will affect other companies too”.
Read here on TAE’s position on digital services tax. 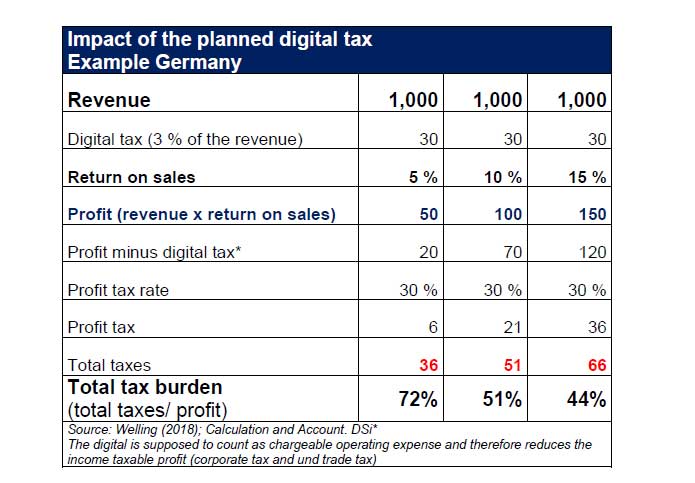 UNITED KINGDOM: Policy Victory as PM Promises to Deliver Better Value for Money on Aid
For over a decade, the TaxPayers’ Alliance (TPA) has campaigned to cut and reform Britain’s foreign aid spending. It is too often a quick route to taxpayers’ money being wasted abroad. Too many aid programmes go beyond basic humanitarian aid and disaster relief operations, becoming giant NGO programmes that are rife with waste and corruption.
In June, the prime minister announced that he was merging the Department for International Development (DfID) and the Foreign and Commonwealth Office (FCO).
In doing so, he was finally acknowledging what TPA has said all along – that serious changes were needed, despite the Westminster consensus that foreign aid was untouchable and that British taxpayers’ interests need to be at heart when money is spent overseas.
Here’s how they did it:

Finally, after years of relentless campaigning, the policy has been adopted – with the prime minister himself echoing TPA’s message on delivering value for taxpayers when making his announcement. While there is still more to be done in reforming the aid budget, this is a big victory for taxpayers. 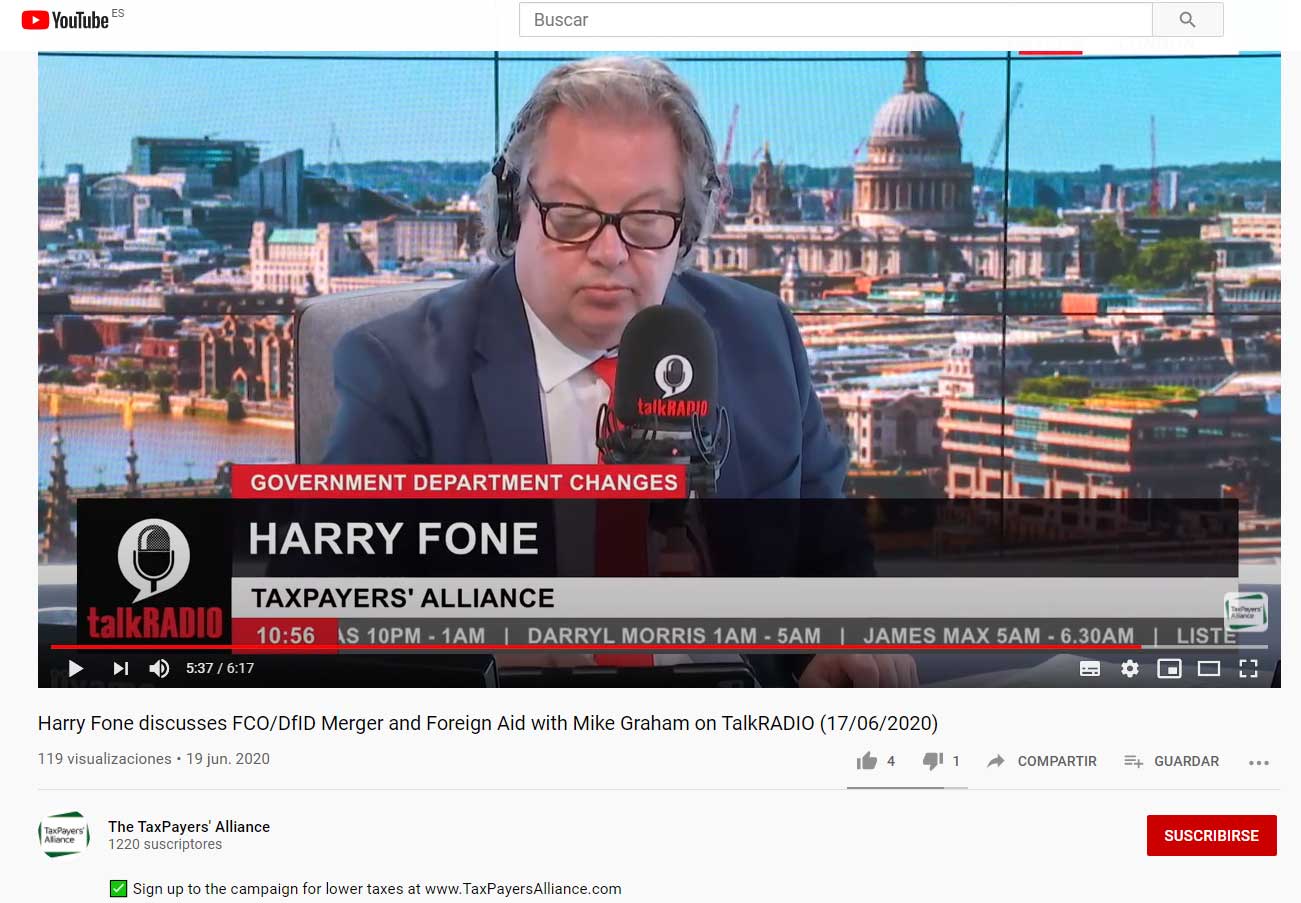 UNITED STATES: NTU Leads 20 Free Market Organizations in Supporting the CREATE JOBS Act
National Taxpayers Union (NTU) is leading 20 organizations, representing millions of taxpayers, consumers, and free-market advocates across the country, in supporting the CREATE JOBS Act from Sens. Ted Cruz (R-TX) and Martha McSally (R-AZ). This pro-growth legislation would strengthen America’s economic recovery efforts, and the coalition is urging Senators to co-sponsor the bill and press for its inclusion in a future COVID-19 package.
Read the full letter here. 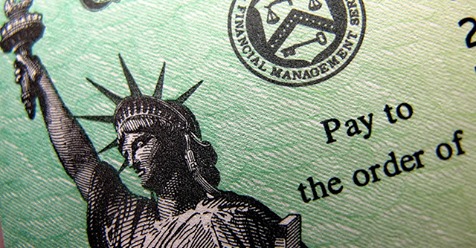 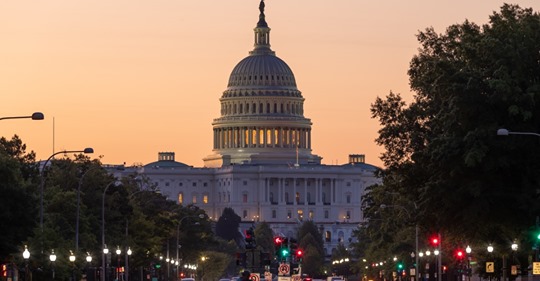 UNITED STATES: 850 Regulations Waived to Help Fight COVID-19
Americans for Tax Reform compiled a list of regulations that have been waived to help fight COVID-19 in the United States. Federal and state and local governments have wisely suspended regulations in order to help fight the coronavirus. Many of these rules and regulations were not necessary in the first place, given their tendency to reduce innovation and access to care, not to mention their restriction on liberty.
Here you can find the continuously growing list of suspended rules and regulations, starting with federal waivers, followed by state and local waivers. 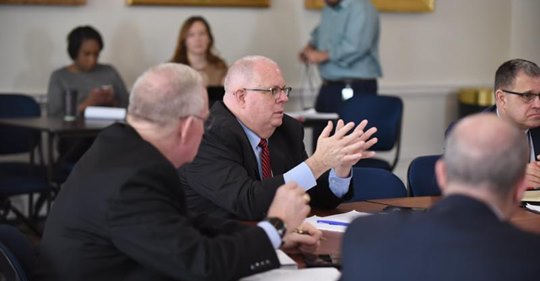 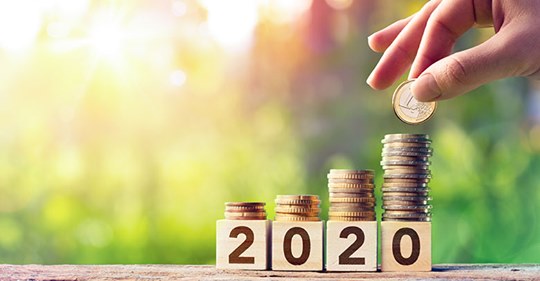 SWEDEN: Tax Freedom Day was July 18th
July 18th is when the Swedish taxpayers celebrated their Tax Freedom Day for a middle-income earner in 2020 according to the Swedish Taxpayers Association. It’s one day later in the year than in 2019 due to municipal tax increases and increased or new excise duties such as electricity and plastic bag taxes. Since 2020 it’s a leap year Tax Freedom Day falls on the same date as last year.
Tax Freedom Day falls on different dates around the country and the variation is great, both between and within the cantons. Between Österåker and Dorotea, which have the country’s lowest and highest municipal tax, respectively, there is a difference of nine days.
Since 2006, when Tax Freedom Day fell on August 8th, there has been a continuous improvement benefiting workers and taxpayers around Sweden. Nevertheless, the trend changed in 2016.
Read the full report here.

Reports:
EUROPE: The Tax Burden of Workers in the EU — 2020
Institut Économique Molinari published, for the eleventh year in a row, its study on the actual tax and social burden faced by the average employee in the European Union (EU). This ranking has the distinct feature of showing the pressure endured by average employees for the current year, using a solid methodology applied uniformly throughout the EU and providing a good grasp of the true impact of taxes and charges and of the shifts that are occurring.
Workers in France celebrate their tax liberation day on July 19th, as in 2019. Taxation on the average worker in France amounts to 54.68% in 2020, down by a sliver (-0.05%) from last year due to an income tax cut announced following the “yellow vest” crisis. This gain amounts to €126 over the full year for the average unmarried worker.
Austria comes in second, with social and fiscal freedom day on July 18, one day earlier than last year. Taxation on the average worker amounts to 54.46% in 2020, down from last year (-0.26%). This change results from bringing forward an individual tax cut planned for 2021 by reducing the lowest income tax bracket from 25% to 20%. Without this measure, Austria would have been the leader in taxation of the average worker in 2020, with social and fiscal freedom day falling on July 20.
Belgium is third on the podium, with social and fiscal freedom day on July 16, one day later than in 2019: With its “tax shift”, the former number 1 in this ranking (from 2011 to 2015) became number 2 (in 2016 and 2017) and number 3 in 2018.
Belgium remains number 3 in 2020, with 53.76% in social and fiscal pressure on the average worker, up from last year (+0.13).
On average, social and fiscal freedom day falls on July 14 in the European Union, one day later than in 2019. For the first time in six years, the effective tax rate on workers is rising. It is 45.09% in 2020, compared to 44.85% last year, an increase of 0.24%. Over one year, 13 EU countries have seen higher levies on the average worker, while the level is stable in one country and 13 have seen reductions.
Read the full report here.

2020 TAX AND SOCIAL CONTRIBUTION FREEDOM DAYS FOR THE AVERAGE EMPLOYEE 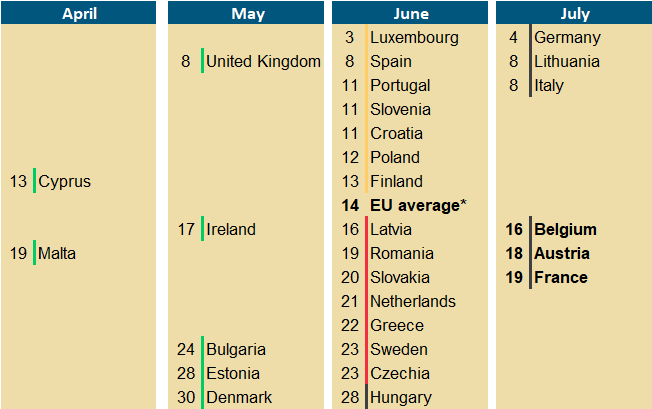 WORLDWIDE: Tax Burden on Labour among OECD countries
The Tax Foundation released a new report comparing the tax burden on labour among OECD countries.  Individual income taxes, payroll taxes, and consumption taxes like value-added taxes (VAT) comprise a large portion of tax revenue in many countries. Combined, these taxes make up what’s called the “tax burden on labour.”
Economists generally agree that a higher tax burden on labour leads to lower employment rates and wages. That’s important for policymakers to remember as they look for ways to help their economies recover from coronavirus-induced shutdowns. If their goal is to encourage employment, policies that lower the tax burden on labour could prove a powerful tool.
In 2019, the average OECD tax wedge for a single worker with no children earning a nation’s average wage was 36 percent. Tax burdens on labour are particularly high in Europe—the 25 countries with the highest burden in the OECD are all European. Belgium has the highest tax burden on labour at 52.2 percent.
As policymakers across the OECD evaluate options for recovery, as well as their long-term economic competitiveness, they should consider the burden their tax system places on labour and employment and the economic incentives it creates. 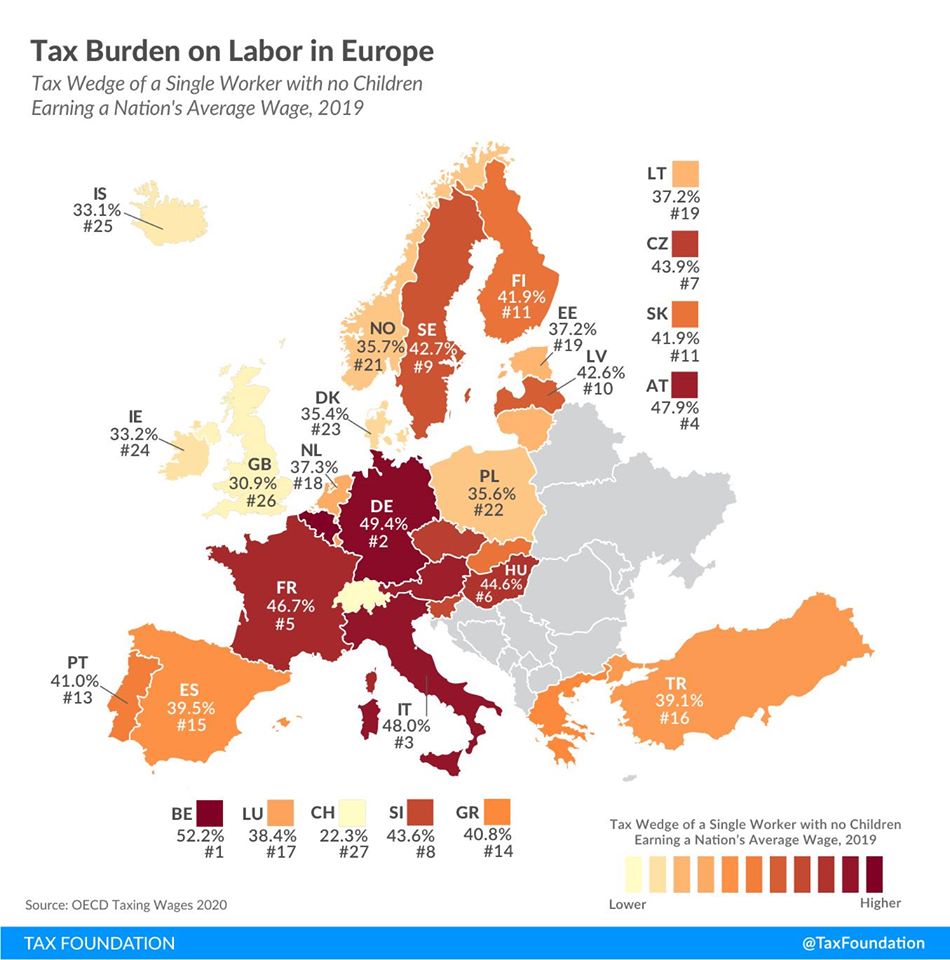 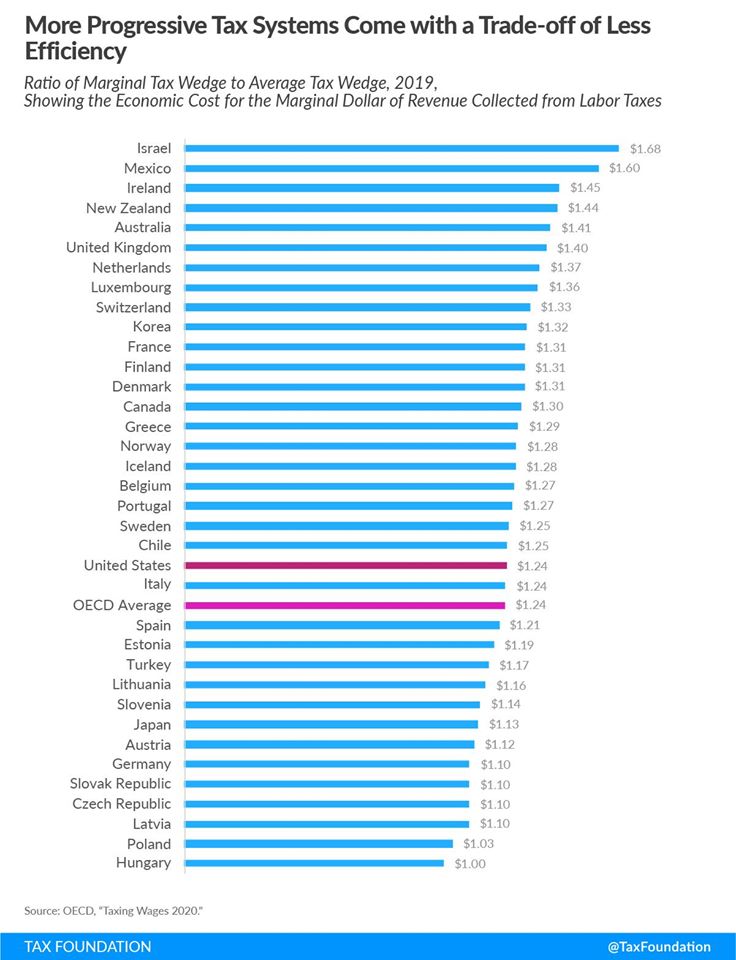 Resources:
WORLDWIDE: Tax Basics
The Tax Foundation just lunched Tax Basics where you can learn the answers to 28 of tax policy’s most frequently asked questions and learn how to debunk 10 common myths and misconceptions. You can also browse detailed definitions of over 60 common tax terms or learn about the principles of sound tax policy.
You can explore the “Tax Policy 101” crash course, which covers all the fundamentals, from the basic tax types and how much revenue they raise to their impact on the economy and human behaviour. 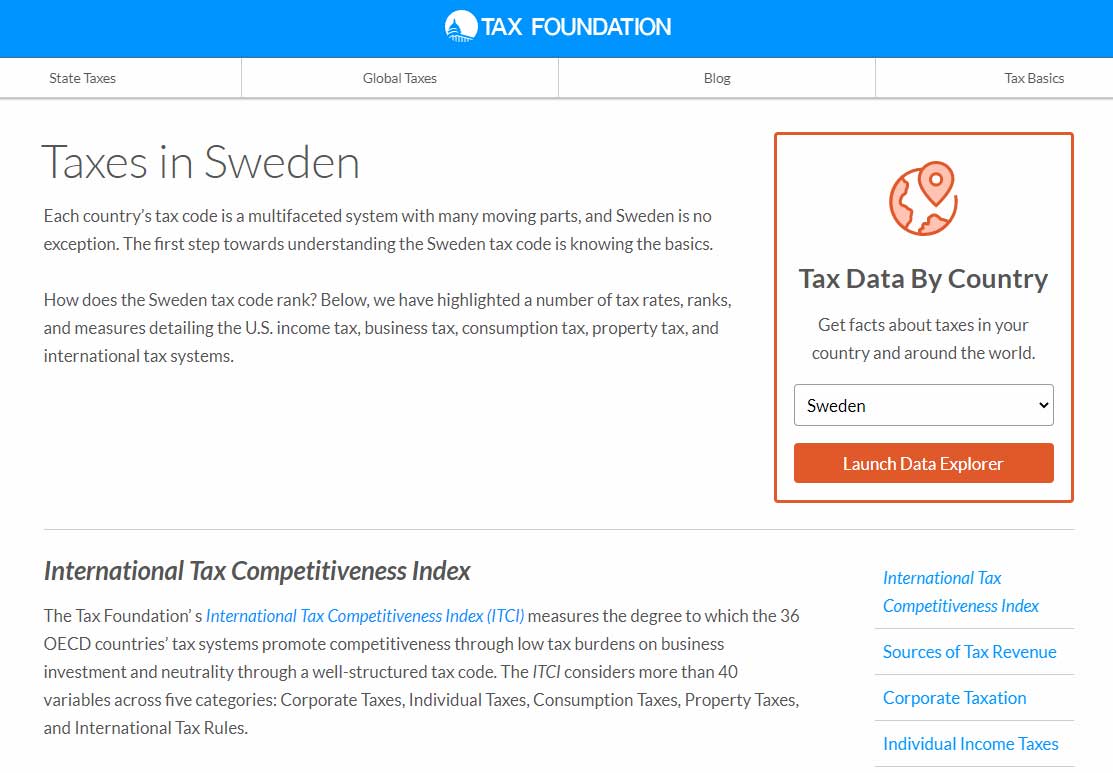 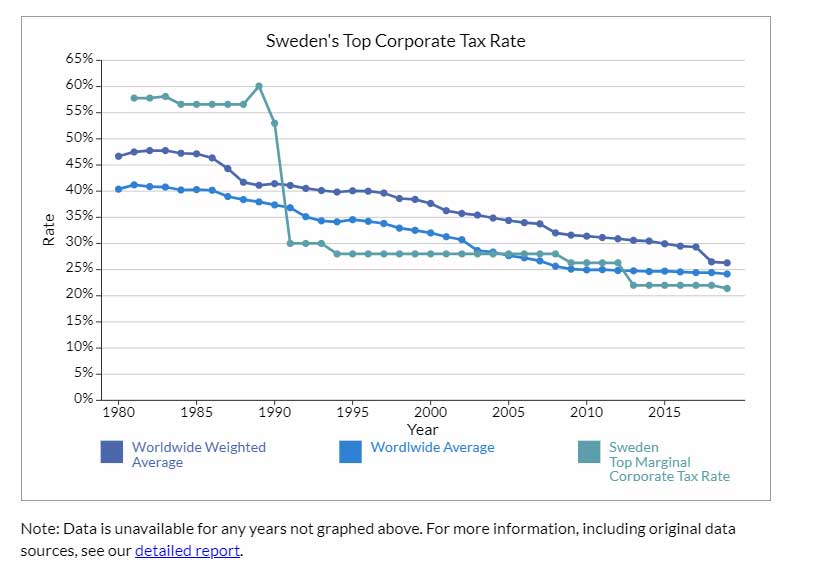